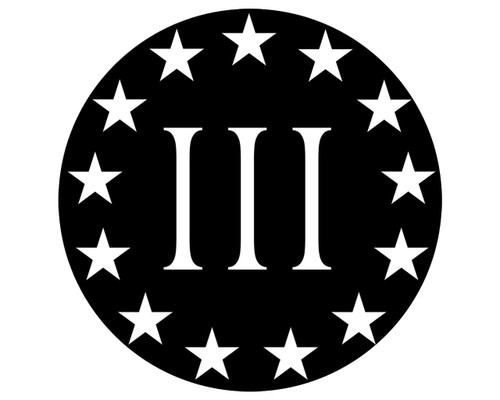 *Always make sure you are sticking your decal to a clean surface, even a surface that looks clean could have oils that could prevent your decal from adhering!

During the American Revolution, the active forces in the field against the King’s tyranny never amounted to more than III% of the colonists. Three percenters today, for the most part, identify with this 3% because they were true patriots fighting for the freedoms the nation we love and honor was founded on. Three percenters intend to maintain their God-given natural rights to liberty and property. History itself, for good or ill, is made by determined minorities. Never underestimate the power of a small group of committed citizens to change the world. Indeed, it has never been done otherwise.

I am a III Percent Patriot.

Those before me who were known by this title took the field against the King and fought to repel the tyranny of the Crown. We had the support of many in the Colonies, but only about three percent of us took to the fields of battle with the arms of the Militiaman.

It is my turn to stand against Evil.</p> <p>3 Percent. III Percent. Threepers. III'pers.

I am the defender of my republic against all enemies, foreign and domestic. Mine is the final recourse, the final appeal, the final line of defense of Liberty. I am there, when words have failed.

American Flag "We The People" Charging Handle for AR-15